AfCFTA and The Nigerian Agricultural Sector

Nigeria has a diversified agro-ecological condition, which makes it possible to produce a wide range of agricultural products. Hence, agriculture forms one of the key sectors of the economy. The sector is particularly important in terms of its employment generation and its contribution to Gross Domestic Product (GDP) and export revenue earnings. This discourse provides a review of the Nigerian agricultural sector with respect to the African Continental Free Trade Area (AfCFTA).

It is well documented that Nigeria’s agricultural sector has experienced various setbacks, including sporadic flooding, Boko Haram (BH) insurgencies, and conflicts between herdsmen and local farmers. Despite these setbacks, Agriculture accounts for about 24 percent of Nigeria’s GDP. The country is a leader in various types of agricultural production, such as palm oil, cocoa beans, pineapple, and sorghum. It is the largest producer of sorghum in the world just after the United States and ranks fifth in the production of palm oil and cocoa beans. Nigeria is also a large global exporter in this sector. Oil, fruits, nuts, and seeds are among the ten best performing export categories (Statista).

Agriculture is broadly divided into four sectors in Nigeria–crop production, fishing, livestock, and forestry. Crop production remains the largest segment and it accounts for about 87.6% of the sector’s total output. This is followed by livestock, fishing, and forestry at 8.1%, 3.2%, and 1.1% respectively. Agriculture remains the largest sector in Nigeria contributing an average of 24% to the nation’s GDP over the past seven years (2013 – 2019). In addition, the sector employs more than 36% of the country’s labour force, a feat that ranks the sector as the largest employer of labour in the country (PwC). 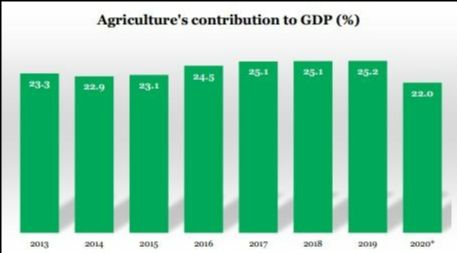 While on the one hand, Nigeria is the largest fish consumer in Africa and among the largest fish consumers in the world with about 3.2 million metric tons of fish consumed annually, on the other hand, Animal production has remained underexploited. Livestock mostly reared by farm families in Nigeria are the small ruminants like goats (76 million), sheep (43.4million), and cattle (18.4 million). The ecology in the northern part of the country makes it famous for livestock keeping. In addition to small and large ruminants, the poultry population stands at 180 million poultry (FMARD, 2017).

For Nigeria to effectively maximize the economic benefits of the African Continental Free Trade Agreement, the Federal government of Nigeria is establishing Special Agro-Industrial Processing Zones (SAPZs) to concentrate on agro-processing activities. SAPZs are aimed at boosting productivity, integrating production, and enhancing the processing and exporting of select commodities and as part of its plans to aid the free flow of goods, the Government is in constructing rail lines across the country, and once complete, these would serve as an alternative to road transport and enhance the distribution of goods and commodities within the country.

In addition to the proposed establishment of SAPZs, the Federal government is also investing in the rehabilitation construction of roads linking numerous parts of the country. A key example is the ongoing rehabilitation of the Lagos Badagry expressway which serves as a key component of the West African Trade Routes. These developments are not without challenges. It follows that the customs and border administration processes are relatively inefficient, with multiple bottlenecks which negatively impact the cost and the ease and efficiency of cross-border trade.

So far, the Special Agro-industrial Processing Zones project has already attracted significant interest from private sector food and agro-businesses in Nigeria. SAPZ which is promoted by the African Development Bank and expected to get underway in seven states (Cross River, Imo, Kaduna, Kano, Kwara, Ogun, and Oyo, and the Federal Capital Territory FCT) in Nigeria is not only a game-changer for agriculture in the country but is designed to support inclusive and sustainable agro-industrial development in countries across the continent. While investments of at least $1 billion are expected in these zones by the private sector, the board of directors of African Development Bank in December 2021 approved a $160-million loan to get the program underway in seven Nigerian states and Nigeria’s Federal Capital Territory.

Conclusively, a rapid rollout of the first phase of the Special Agro-Industrial Processing Zones (SAPZ) that will drive food processing and value addition across Nigeria and Africa through the AfCFTA policy and framework is a welcomed transformative solution to improving Nigeria’s export revenue earnings as well as unemployment.