FOREIGN OWNERSHIP OF A NIGERIAN COMPANY 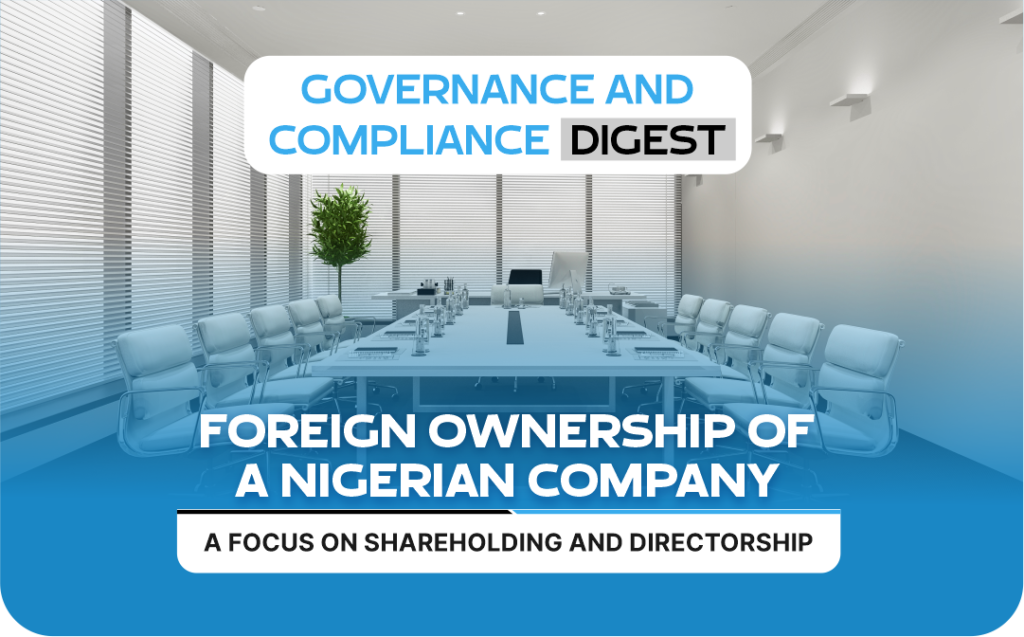 The Nigerian legal framework allows both citizens and non-citizens (individual and corporate) to form a company, own shares of an existing company, and have control over an indigenous company. It is imperative to note that the enabling law in which these provisions are enshrined is dynamic to the extent that there are provisions which sets out the requirement for incorporation, as well as categories of companies which may be exempted from incorporation in Nigeria. This article seeks to carefully review the concept of foreign ownership of a Nigerian Company with focus on the shareholding and directorship requirements.

FOREIGN OWNERSHIP OF A NIGERIAN COMPANY

In Nigeria, the Companies and Allied Matters Act 2020 (“CAMA”) is the principal legislation on company formation in the country while the Corporate Affairs Commission (CAC) is the regulatory body saddled with the affairs of regulating the day-to-day businesses of companies. CAMA provides amongst other things that every foreign entity (individual or corporate) seeking to carry on business in Nigeria shall compulsorily incorporate such company within the country provided it does not fall amongst the category of companies exempted from incorporation as stipulated by law.

Section 55 of CAMA provides that where a foreign company fails to comply with the requirements of incorporation where applicable, such company shall be guilty of an offense and liable on conviction to a fine. Section 55 goes further to state that every officer or agent of a company who knowingly and wilfully authorises or permits the default or failure to comply shall whether or not the company is also convicted of any offense, be liable on conviction to a fine.

Further to the above, it is salient to note that a foreigner can either own a Nigerian company to carry on business in either of the following ways:

a. Incorporation of a Company

As earlier stated, a foreign entity desirous of owning a Nigerian company for the purpose of carrying on business is required to incorporate such a company except such a company falls under the category of companies exempted from incorporation. For a foreign entity to participate in business in Nigeria, it is salient to note that N10,000,000 (Ten Million Naira) is the authorized share capital.

b. Exemption of Foreign Companies from Incorporation

Every other foreign company that does not fall within the categories mentioned above must incorporate a company before commencing business transactions in Nigeria.

The argument that the concept of single-shareholding does not apply to foreign-owned entities registered in Nigeria as they are not considered small companies as defined under the Act has now been settled. It is important to note that the requirements for qualification as a small company as provided for in Section 394 (3) (a-f) of the Act do not include the number of shareholders. It is pertinent to note that CAMA 2020 classifies companies as small and others using a combination of different parameters. Section 394 (3) of CAMA 2020 classifies a company as small if it satisfies certain conditions including that (a) must be a private company, (b) maximum turnover of ₦120million, (c) maximum net assets value of ₦60million, (d) has no foreign member, (e) has no government membership; (f) directors must hold at least 51% of its share capital. As such, a Nigerian company can be foreign-owned and operational with a single shareholder where it is registered as a company other than a small company.

CAMA recognises three (3) types of directors: the executive directors, the non-executive directors, and the shadow directors. The Executive directors are those involved in the day-to-day management of the company’s business usually with departmental positions. On the other hand, a non-executive director is one merely appointed to the board of directors and named in the records of the Corporate Affairs Commission (“CAC”) whose main mandate is to provide oversight, sectorial expertise, knowledge, and new skills to the company’s management team. While a shadow director is a directorship that arises based on the presumption of law. It is a position imposed by Section 270 (1) of CAMA. By the said provision, any person on whose instructions or directions, the directors of a company are accustomed to act will be deemed to be a shadow director unless such person is doing so in a professional capacity.

Further to our understanding of what a small company is as earlier explained, it follows that a small company may have at least one (1) director while any other private company limited by shares (which is not a small company) must have at least two (2) directors. The implication of this cannot be overemphasized, every foreign-owned private company in Nigeria must as a matter of statutory obligation have at least two (2) directors. However, a foreign director may not be appointed as a Managing Director of a company or be a signatory to a bank account unless such a person has obtained a requisite work permit, specifically the Combined Expatriate Residence Permit and Aliens Card (CERPAC).

Where the number of directors goes below the minimum, then the company must appoint new director(s) not later than one (1) month or stop its business operation. Salient to note also is the fact that there are some regulated businesses that require different numbers of directors, for example, companies seeking to operate in the financial sector with a licence of the Central Bank of Nigeria is required to have not less than five (5) directors whilst a moneylender company seeking to operate in Lagos must have at least two (2) adult directors.

It is therefore submitted that a Nigerian company can be foreign-owned with a single-shareholder and at least two (2) directors provided it is registered as a company other than a small company and it complies with the registration requirements of the CAC and the Nigerian Investment Promotion Commission (NIPC) on foreign participation in Nigeria.