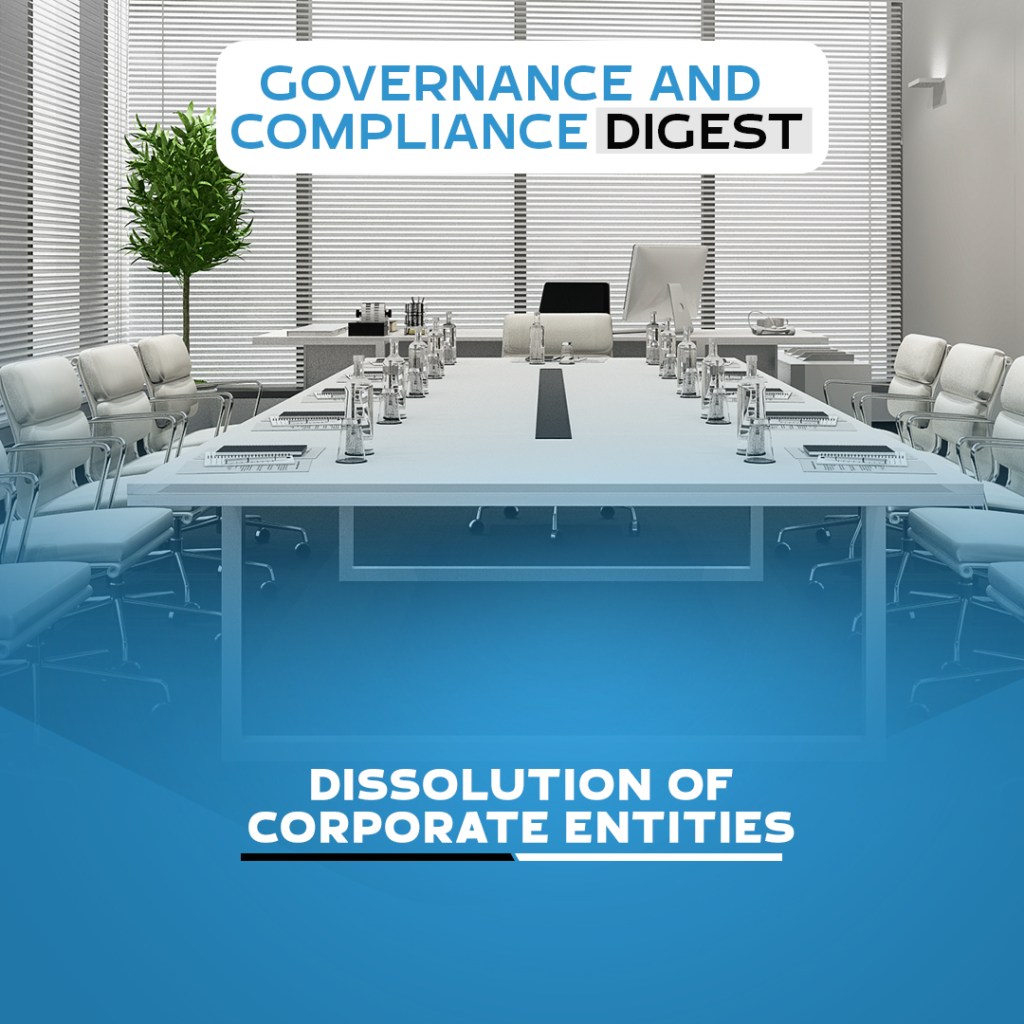 Dissolution of an entity refers to a process by which the existence of a corporate entity is ended, thus, leading to the distribution of the company’s assets for the benefit of the creditors and members of the company.
The Companies and Allied Matters Act 2020 (CAMA), makes provisions for the process of dissolving an entity, hence, bringing the business of an entity to an end. The various ways through which the business of an entity can be brought to an end are discussed in this Article.

Striking off a name of a company is a process whereby the name of a defunct company is struck off from the Register of Companies, either suo moto by the Corporate Affairs Commission (CAC or Commission) or by an application from the company.

Procedure for Striking Off a Company

A defunct company under the Companies and Allied Matters Act 2020 is a company that has not commenced business and has no undischarged obligations, or a company which the CAC observes or has reasonable cause to believe is not carrying on business or has not been in operation for Ten (10) years or has not complied with the provisions of CAMA for a consecutive period of Ten (10) years. See Section 692 of CAMA 2020.

Application for Striking Off made by the Company

Furthermore, CAC may strike off the name of the company if it is satisfied that:

CAC has the power to suo motu strike off the name of a company from the register where it observes or has reasonable cause to believe, that the company is not carrying on business or has not been in operation for ten (10) years or has not complied with the provisions of the Companies and Allied Matters Act for a consecutive period of Ten (10) years. See section 692 of CAMA 2020.

In carrying out this power, the Commission must comply with the procedure contained in Section 692(3), (4), and (5) of CAMA provides, the procedure is as follows:

Any company, member, or creditor aggrieved by the striking off may apply to the court, at any time before the expiration of Ten (10) years from the date of the publication.

Winding-up is a process where a company formally dissolves its business and statutorily goes into extinction. The purpose of a winding-up process is for a company to cease doing business, as usual, sell off its assets, pay off creditors (where applicable) and distribute the remainder of its assets to its member.

Winding-up of a company under CAMA

Winding-up is primarily governed by the CAMA 2020. It can be classified into the following:

This is a self-imposed dissolution of a company following the decision and approval of its shareholders for the company to discontinue operations. It is the winding-up of a company initiated by a special resolution.

A company’s partner or shareholder(s) may bring up a voluntary winding-up, usually by passing a special resolution. This usually happens when the company is insolvent. In some other cases, the shareholders may feel their objectives have been met and choose to wind up the company.

Procedure for Winding-up an entity

1. Members Voluntary Winding-up
This is a process where the Director(s) of the Company makes a Statutory declaration to the effect that has made a full inquiry into the affairs of the company and they have formed the opinion that the company will be able to pay its debts in full within a period, not exceeding 12 months from the commencement of the winding-up exercise.

2. Creditors Voluntary Winding-up
This id the winding up of a company by a special resolution of the shareholders under the supervision of the company’s creditors in order to pay its debts. This usually occurs when the company is insolvent.

C. EXPIRATION DATE OF A COMPANY IN THE ARTICLES OF ASSOCIATION

The Article of Association of a company is the rules and regulations of the company duly incorporated. Its contents include matters related to the internal working and management of the company.

However, Articles of Association generally deals with, but are not limited to:

The Companies and Allied Matters Act 2020 provides under Section 620 that a company can deem it fit to incorporate a date it could be dissolved in the Article of Association. Furthermore, other circumstances that may warrant the dissolution of a company are when the members of the company are satisfied that the aims and objectives of the company have been achieved.

In conclusion, it is noteworthy that the moment an entity is dissolved by the process of winding up, it follows that such entity by implication ceases to carry on business and no longer has a legal personality. On the other hand, where an entity has its name struck off the register of companies, it follows that such an entity is deemed by CAC or its members to be defunct and having no undischarged obligations.