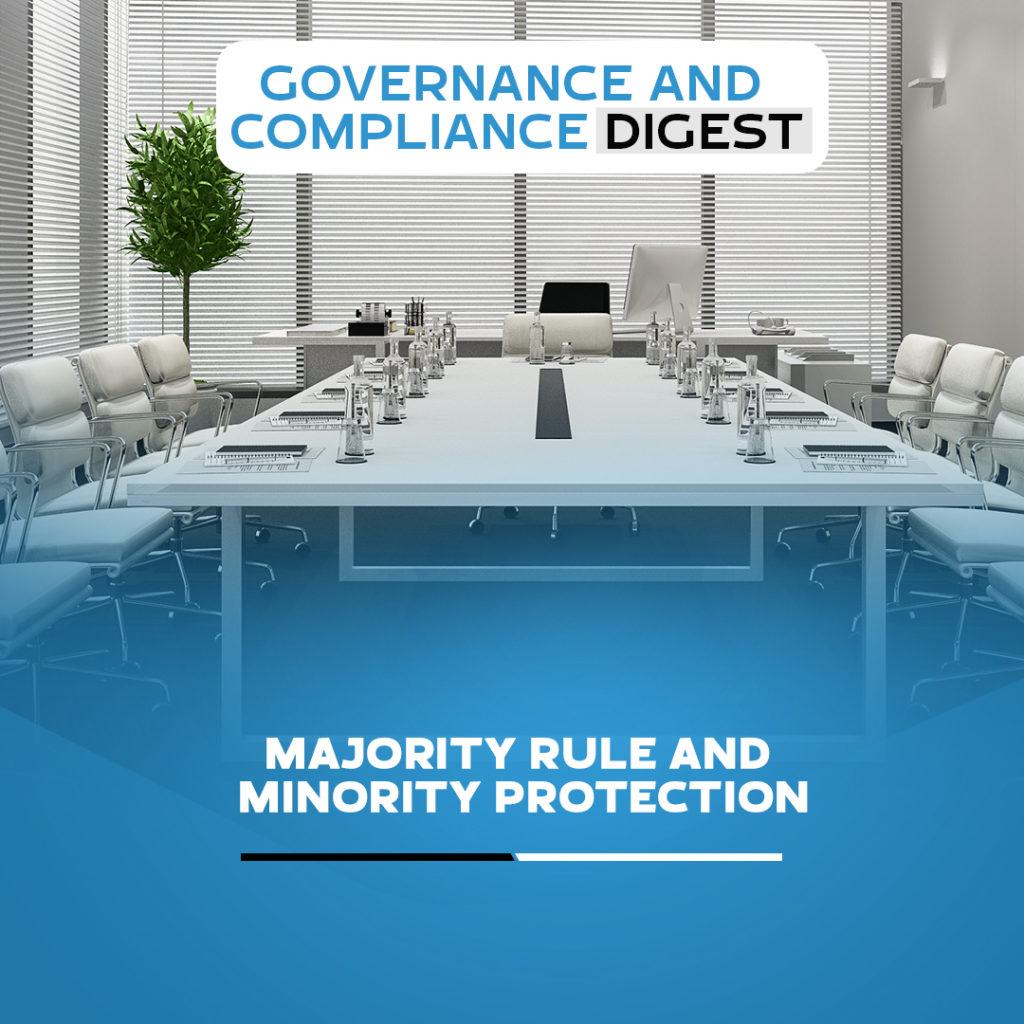 In addition, where it is alleged that something has been done by or on behalf of the company irregularly which the company would do regularly or regularize, there is no use having a suit, but all that needs to be done is for the majority to ratify and the same. Therefore, the rule in Foss vs Harbottle is also known as the Internal Management Rule. By this rule, the court could not interfere with the internal management of companies acting within their powers. If there is a wrong done to the company for which redress is needed, it is the company that must sue. The principle is based on the implications of corporate organization and management, which must include, subject to well laid down exceptions, the supremacy of the majority.

Thus, the rule lays down the majority rule and it is found on the rationale that to allow individual shareholders suits or actions for wrongs done to the company would result in multiplicity of actions which would be expensive, time wasting, blackmailing, and inhibiting. So much so that it would be tedious for the company to keep operation. So, the rule in Foss v Harbottle has been enacted into Section 341 CAMA 2020 which provides as follows:

Over time, the rule admitted several exceptions. However, these exceptions could hardly be regarded as such because they cover instances of personal property to the shareholders of the company and not the company itself. The exceptions have been enacted in Section 343 CAMA. According to that section, a member of the company has the right to sue for an injunction or declaration to restrain the company from the following actions and that shall be without prejudice to the rights of the member as guaranteed under Sections 346-351 and Sections 353 -355 of the CAMA 2020.

THE EXCEPTIONS:
a. An action or transaction which is outrightly illegal or ultra vires.
However, it is doubtful that such individual would come under this exception where the ultra vires act has been completed.

The above listed rights are personal to the shareholders, not the company, going by their very nature and essence.

d. The shareholders could also individually sue to prevent a company from committing fraud, either against itself or on the minority shareholders. The individual shareholders could exercise this power where the directors have failed to take an appropriate action to address a wrong that has been done. In the case of COOK v DEEKS a company had four shareholders, who were also the board of directors. Three of the directors cut off relations with the fourth, Cook. When the three directors learned of a new Canadian Railway contract available for tender, they negotiated for it in the name of the Toronto company. Then they formed a new company to take the contract, in order to exclude Cook. The Toronto company issued a resolution declaring that the Toronto claimed no interest in the new Canadian Railway contract. However, Cook claimed that the benefit of the new contract belonged to Toronto. The Privy Council held that the new company and its three directors, who concluded new contract, must be liable for the profit made. The contract was obtained by the three directors whilst in their positions as fiduciaries within the old Toronto company. The benefit of the contract thus belonged in equity to the old Toronto company. The three directors could not use their voting power to put the new contract in their hands.

e. The shareholders could also bring an action where a meeting cannot be called in time to be of practical use in redressing wrong done to the company or the minority shareholders.

f. Where the directors are likely to derive a profit or benefit or have profited or benefitted from their negligence or breach of duty.

g.  Any other act or omission, where the interest of Justice so demands.

In conclusion, the rule in Foss vs Harbottle is geared towards preserving the legal personality of the company, eliminating multiplicity of suits which would invariably slow down the operation of the company and to also check the extent of the court’s intervention in the company’s internal management, which ultimately keeps the majority rule afloat.

For further discussion and assistance with filing any of your organization’s compliance returns to the Corporate Affairs Commission, as well as providing you with Board Evaluation and Nominee services, please contact us at contact@firstfiduciary.ng or any of the team member below: