The African Union (AU) is a continental-wide intergovernmental organization established in July 2002 by the Durban Summits. It is the successor of the previous Organization of African Unity (OAU). The AU consists of fifty-five member states.

The vision of the AU is to achieve an integrated, prosperous, and peaceful Africa which is driven by its citizens and represents a dynamic force in the global area. The AU seeks to coordinate and harmonize the programs and policies of existing and future Regional Economic Communities (RECs) in order and generally attain the integration of all African State.

RECs are regional groupings of African states. The RECs are composed of different individual countries in different subregions, each REC has different roles and structures. The general purpose of the RECs is to ensure regional economic integration between members of the individual regions and through the wider African Economic Communities (AEC), which was established under the Abuja Treaty (1991).

In March 2018, AU members adopted the Africa Continental Free Trade Area (AfCFTA). The AfCFTA’s aim is to create a single market across the 54 members of the African Union and also boost intra-African trade by providing a comprehensive and mutually beneficial trade agreement among the member states, covering trade in goods and services, investment, intellectual property rights, and competition policy.

In Africa, there are quite a number of RECs, but in the African Union (AU) under the AfCFTA only eight are recognized and they include: 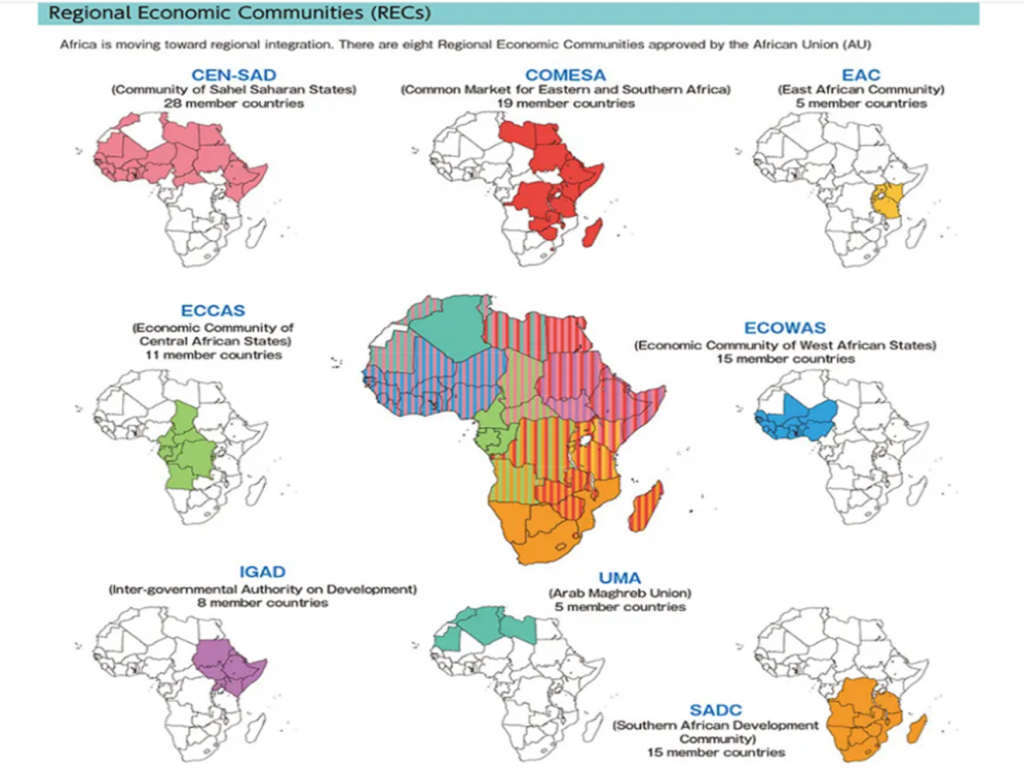 Most African states belong to more than one REC, for example, several members of the EAC are members of the COMESA and this makes it difficult for deeper integration as each REC has a different protocol. In the AfCFTA agreement, one of its general objectives is to “resolve the challenges of multiple and overlapping memberships and expedite the regional and continental integration processes”. The agreement does not specify how this issue will be resolved.

The AfCFTA was not created to replace the existing RECs, instead, it recognizes the RECs as its building blocks. The AfCFTA encourages state parties who are members of other RECs that have achieved deeper integration (trade agreements that do not only contain tariff rules and conventional non-tariff trade restrictions but also regulate the business environment in a broader sense) to maintain and, where possible, improve on it.

In the subsequent editions of this newsletter, we would x-ray each of the RECs. We will also discuss the roles that the RECs play vis-a-vis the AfCFTA, as well as how the AfCFTA will affect the RECs.